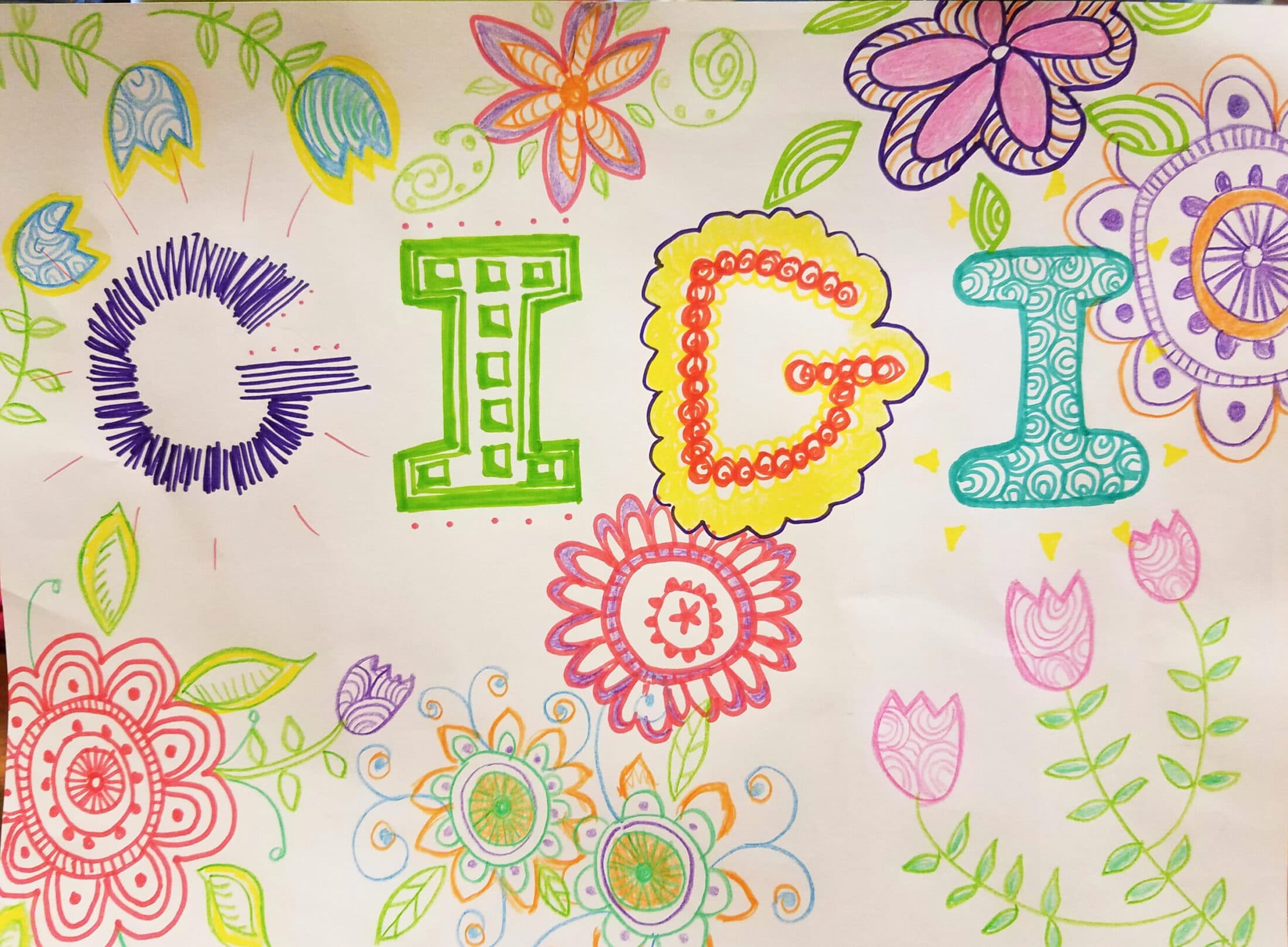 I’ve begun writing my daughter Gigi’s full story.  She passed away in 2016 and I haven’t really written about it at all!  It’s taking much longer than I anticipated, so for now I leave you with Tony’s amazing Eulogy.  (Tony is Gigi’s Daddy!)  He wrote it and read it at her funeral on August 22nd, 2016.

The artwork above is by Gigi’s amazing Aunt Jessica while she was spending time with us at Lurie.

The Words of Thanksgiving

Settle in, folks, I have a lot to say. Good morning. Thank you all SO much for coming out today. You’ll notice that this portion of the service is “The Words of Thanksgiving” and I plan on doing a lot of thanking today.

But first, let’s talk about numbers. I want you to understand Gigi’s story a little bit more.

In the United States, about 960 babies a year are born with Hypoplastic Left Heart Syndrome (or HLHS) the congenital heart defect that our Gigi was born with. That’s 1 in 4,344, which is about .02 of one percent of all babies born in America each year. For reference, that’s about the same likelihood as losing an appendage to a chainsaw accident. (I’m not sure if that’s over a lifetime or per use…) When Andrea and I heard that, we commented that we thought we had won the wrong kind of lottery.

It got worse when the first procedure to insert a stint to relieve some of the pressure on her lungs didn’t work by traveling through her femoral artery to get to her heart, in spite of the efforts of some of the BEST doctors in the country. They tried everything they could but of course they had a backup plan. This time they would go in by opening her sternum and going through the heart to place a stent. The doctors had done it exactly three times before. THREE. At one of the best places for neonatal cardiac surgery in the WORLD. And of course, the next morning it went smoothly and accomplished everything that it needed to, because they are the best. And now they have done the procedure FOUR times. However, with the extra complications of her HLHS, she was still only predicted to have a one in five chance of survival. When her MRI came back and showed severe bleeding in five out of the six major regions in her brain, we knew that survival was unlikely. It became evident that it was time to say goodbye to our daughter when we had just gotten to say hello. So, how do you even begin to describe a life that was against the odds to begin with?

Our daughter was surrounded by six grandparents who loved her and came to visit her all the time, and were all in the room when she passed away. She has 17 aunts and uncles who were there for her and us, along with countless other friends and family members who sent messages of love, prayer and support. The number of people lending their support seemed infinite. She was alive for 11 days. It was 251 hours. It was 14,993 minutes. And though it sounds like a lot, it wasn’t enough. I’ve learned no amount of time to spend with your child is enough. But every single second, every single moment we spent with her felt like a gift. She couldn’t move, she couldn’t talk, she was only able to open her eyes a few times, but those 14,993 minutes are something I would never, ever trade as each one showed me how to love more than I thought possible.

Let’s talk about love. Uncontrollable, unconditional love. Everyone talks about how much your life will change when you have a child. And even though we didn’t have the time with Gabriella that we thought we would, the love for her will remain with us always. The love our family and friends showed us will remain always. I am comforted by the words of the Lord Alfred Tennyson, who wrote his famous poem “In Memoriam A.H.H.” about his friend who had died suddenly of a cerebral hemorrhage. You probably know this stanza:

I hold it true, whate’er befall;

I feel it, when I sorrow most;

‘Tis better to have loved and lost

Than never to have loved at all.

Though we have lost Gigi, she was beloved by so many, none more fiercely than her mother and I and her family. We will be stronger for having her, and stronger for loving her.

Let’s talk about words. Gabriella means either “Woman of God” or “Devoted to God”, depending on which interpretation that you like and Grace means to have the favor of God. So, our baby girl was name as a Woman of God with the favor of God. Pastor Allen came out to pray with us on the first Friday. On the last Thursday, he came to baptize Gigi, and he was there when Gigi passed away, praying with us all the way. I’m not always the strongest of conviction, but the word of the Lord strengthened us. All of your words of comfort and prayers strengthened us. I don’t think you all know how much we appreciate the words that came from all over, from our family in Chile to across the US, and yes, to even a prayer group in Norway. That’s not a joke. Someone had a prayer chain going in Norway. Those words and those prayers mattered to us. Thank you for those words.

Many of you may be wondering how we can possibly see positives in this type of situation. Andrea and I spent a lot of time talking and we feel that even in face of all of these challenges, the grace from God was that her stroke was so overwhelming that we didn’t have to put our baby through any more suffering through surgeries and procedures. The grace of God allowed our devoted woman of God to return to him.

If we think about some other words we used to describe our Gigi, Diva is one that had always been on the tip of our tongue. Andrea often spoke of her being a Diva-in-training while she was in the womb, kicking all the time, demanding cheeseburgers, and loving the music that Andrea performed. She was certainly a Diva with her arrival, taking her sweet time to arrive (over 24 hours of labor), demanding a trip to the NICU in her first few hours of life, an ambulance ride within her first 12 hours, a 2-hour surgery that took over six, and everything else at her own pace. I’m sure she’s asking for a Unicorn in Heaven right now, and for only the best peanut butter chocolate ice cream available.

We quickly discovered that Gabriella was a warrior. For those of you that don’t know, children with congenital heart defects are often called heart warriors, because of the scars their surgeries create and because of the indomitable spirit. Gigi dealt with her first surgery like a champ and recovered quickly. In spite of the incision running down her chest, she bounced back and was ready for more, until a massive stroke came and robbed her of the ability to fight. The warrior spirit was definitely there.

Gabriella Grace was a princess too. Her fashion sense, which consisted of hats, headbands, and socks, brought delight to all the came to visit, the doctors and nurses, and everyone following along on social media. She had a veritable armada of people waiting on her hand and foot (and heart) 24 hours a day, and each one was absolutely delighted to serve her. Beyond her family, the nurses and doctors and support staff at Lurie Children’s hospital treated her like a princess. More than that, they treated her with love and compassion. I can’t tell you how many of her doctors and nurses would just stop by to check on her, or how one of her nurses decided to be on Team Gigi, which meant anytime she was on shift, she would be assigned to be with Gigi, and only Gigi. If that’s not royal treatment, I don’t know what is.

And now Gigi is an angel. You may have noticed a butterfly motif around here. On the cardiac floor, those who passed away were given a butterfly as part of their courage beads, and when the patient was about to pass away, a butterfly was hung up on the door outside their room to let everyone know. I find it comforting that before I even knew about any of this, my favorite book to read to my daughter was Eric Carle’s The Very Hungry Caterpillar. For those of you that don’t remember, at the end, the caterpillar turns into a beautiful butterfly, soaring across the page and up to the heavens. I have to believe that our Gigi became that metaphorical butterfly and angel as she made her way to see her family and friends that she didn’t even know she had waiting for her.

Finally, I leave you with thankfulness. We cannot even begin to thank all of you here today for your words, your faith, and your love. You have sustained us through some of our darkest hours and days. I’m thankful to our family members and friends, both who have been next to us, and those that are sending their love from afar. I cannot thank all of you enough for all that you’ve done, from texts to visits, to great big old crying sessions.

I’m thankful to the medical professionals who did absolutely everything in their power to help Gigi, from the nurse who first noticed something in her early hours of life, to the NICU team at Central DuPage Hospital, to the nurses and doctors at Lurie Children’s hospital. We’re thankful for the Ronald McDonald House, which is an amazing charity that allowed us to have a place to stay, meals to eat, and allowed us to focus on Gigi without worrying about anything else.

I’m thankful for my coworkers who stepped up without hesitation and let me focus on my daughter, without having to give a second thought to the craziness that’s the beginning of the school year. I’m also thankful to our church family, including Pastor Allen, who have all been by our side and walked steadfastly on this journey with us.

But most of all, I’m thankful for my wife, Andrea, who has been the strongest person I know. We have stuck together through this, talked it out, cried it out, and loved it out. She has been amazing and without her love, I would be lost. Thank you, my love.

The Words of Thanksgiving. Thank you all.

© 2021 Flutterby Hope. All Photos by Andrea DiOrio unless otherwise stated